LeBron James, shown at the Cleveland Cavaliers' media day in suburban Cleveland on Sept. 26, 2014, will make his return to his hometown team with a preseason game against Maccabi Tel Aviv. (Jason Miller/Getty Images)

TEL AVIV (JTA) – The carnival’s coming to Cleveland, and the Maccabi Tel Aviv basketball team has a front-row seat. In fact, the 2014 Euroleague and Israel Super Basketball League champions will be participating. On Sunday, Tel Aviv will present the inaugural challenge for NBA superstar LeBron James as… Read more » 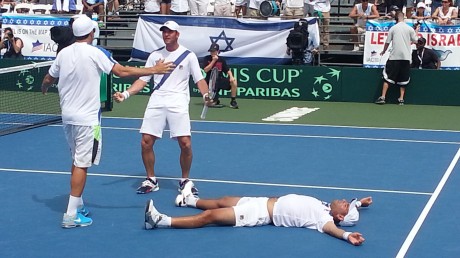 (JTA) – Having been a standout player in high school and college, and an assistant coach, new Yeshiva University men’s volleyball coach Jacqui Dauphinais has plenty of knowledge about the sport. And in her one season as an assistant for the Maccabees, she showed she wasn’t afraid to speak… Read more » BALTIMORE (JTA) – Blocking brothers, a college star seeking success in the pros, a fullback who hasn’t had a carry in four seasons and a couple of ace special teamers are among the Jewish players on NFL rosters as the league kicks off this week. A punter may join… Read more » BALTIMORE (JTA) – For Jeff Idelson, the director of the National Baseball Hall of Fame and Museum in Cooperstown, N.Y., induction weekend is all about teamwork. “When you get to signature events you’re in a small community, all the pieces have to come together effectively for it to be a… Read more » Andrew Goldstein, a member of Israel’s national lacrosse team, says “the landscape has really changed” for gay athletes since he came out in 2005. (Larry Palumbo)

BALTIMORE (JTA) — In the years after coming out as gay, lacrosse player Andrew Goldstein recalls being asked on panel discussions whether major American professional sports leagues would include openly gay athletes. It’s a question, Goldstein said, that is no longer relevant with Jason Collins in the National Basketball… Read more » (JTA) – When Argentina plays its opening-round matches in the World Cup, Mariano Schlez of Buenos Aires will be screaming his support from the stands. But taking in his home country’s matches in Brazil isn’t all that will be occupying Schlez for the first fortnight of the monthlong soccer… Read more »

ABERDEEN, Md.  (JTA) – Standing on a hill on a glorious Sunday morning, Mark and Ron Shapiro are kvelling as they watch Caden Shapiro – son of Mark and grandson of Ron – pitching in a baseball tournament in this city near Baltimore after having been shelved for nearly… Read more » YAGUR, Israel (JTA) — The crowd was sparse and admission was free. Pop music from 10 years ago blared from loudspeakers. A few families sat on bleachers near the athletes, who hopped over a low fence when it was time to compete. The Israeli Equestrian Championships wasn’t the most… Read more » Josh Zeid: "There’s no better place, if you’re a young player, to be than the Houston Astros." (Hillel Kuttler)

BALTIMORE (JTA) – For Houston Astros pitcher Josh Zeid, a recent game against the Baltimore Orioles provided a microcosm of his up-and-down tenure in organized baseball and with the club over the past several months. Entering a 2-2 game in the seventh inning, with two runners on and two… Read more » Ike Davis, on overcoming his hitting woes, says, "You've just got to put your head down and grind." (Hillel Kuttler)

BALTIMORE (JTA) — Ike Davis was upbeat despite the rain pelting the Camden Yards turf and his struggles at the plate. The new Pittsburgh Pirates first baseman was playing catch with teammate Josh Harrison when music from the loudspeakers sent him into a dancing whir. Harrison couldn’t stop giggling.… Read more » Might the Maccabi Tel Aviv basketball team someday be lifting the nBA championship trophy, as its players and others did here after winning the 2012 Israeli Basketball Super League title? (Flash 90)

BALTIMORE (JTA) – Maccabi Tel Aviv reportedly is heading back to the United States this fall for its first exhibition games against NBA teams in five years – but greater developments appear to be in the works for the iconic franchise and Israeli basketball. For one, how about NBA… Read more »

BALTIMORE (JTA) – Before leading the Southern Methodist University men’s basketball team onto the practice court March 16, coach Larry Brown spent a few moments in his office with several of his six grandchildren visiting from Charlotte, N.C. The day being Purim, Brown was asked whom he was masquerading… Read more »

(JTA) — Longtime fans of the Chicago Cubs know there are a few mainstays they can expect when they visit Wrigley Field: ivy on the outfield walls, a strict no-wave policy rigorously enforced by fans and, most days, disappointing play by the hometown team. But there’s one little-known quirk… Read more »

BALTIMORE (JTA) – In the biblical tradition of lingering in the desert en route to the Promised Land, Major League Baseball teams are packing up and embarking on their exodus from Arizona (and Florida) spring training sites to begin the new season. Rosters won’t be finalized until this weekend,… Read more » BALTIMORE (JTA) — Shortly after assembling the players trying out for the American squad he’d be coaching at the 2009 Maccabiah Games, Bruce Pearl brought them to Sabbath evening services at the Heska Amuna Synagogue in Knoxville, Tenn. The passionate and gregarious Pearl, a veteran of reading the haftarah… Read more » PHILADELPHIA (JTA) — Celeste Morello isn’t Jewish or a sports fan, and has never attended a professional basketball game. But a passion for history — particularly Philadelphia history — prompted her to seek recognition for the hoops pioneer Eddie Gottlieb. Morello succeeded last week when the Pennsylvania Historical and… Read more » Stan Fischler is flanked by producer Glenn Petraitis, left, and co-host Peter Ruttgaizer at the Nassau Coliseum set of their pregame and postgame shows. (Hillel Kuttler)

UNIONDALE, N.Y. (JTA) – As the Boston Bruins buzz the Islanders net throughout the opening period of a game at the Nassau Coliseum, Stan Fischler is standing 10 feet behind the Plexiglas to the left of New York goaltender Kevin Poulin. Fischler, a hockey broadcaster for four decades, can… Read more »