Whether they made it to the medals podium or not, six participants with Tucson ties who went to Israel last month for the 20th Maccabiah Games, known as “the Jewish Olympics,” say the experience was priceless. “Softball is why I came to Israel, but Israel really came to me… Read more » The JEWISH HISTORY MUSEUM/HOLOCAUST HISTORY CENTER presented the Dr. Barry A. Friedman Volunteer of the Year Award to DAVYA M. COHEN at its annual meeting on May 4. Cohen, a volunteer docent at the museum, taught middle school shop for 35 years in Southfield, Mich., before moving to Tucson… Read more » 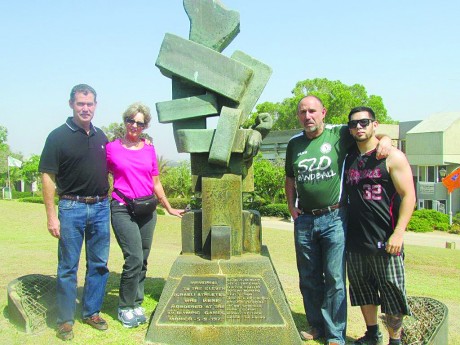 Handball hall-of-famer Fred Lewis, second from right, with his brother, Jack Lewis, sister-in-law, Ilene Lewis, and son, David Lewis, at the memorial to the 11 athletes murdered at the Munich Olympics in 1972, at the Wingate Institute in Netanya, Israel, site of the International Jewish Sports Hall of Fame (Courtesy Fred Lewis)

Israel hosted the world’s largest sporting event of the year this summer, the 19th Maccabiah Games, held July 17-30. Three Tucsonans participated as athletes in the Olympic-style games, which included Jewish athletes from 70 countries, while one current and one former Tucsonan were inducted into the International Jewish… Read more » The thrills of the summer Olympics are behind us, but Tucsonan Rachel Meyer, a 16-year-old Taekwondo champion, has a new international competition to look forward to: the 19th World Maccabiah Games in Israel next July. Meyer will turn 17 at the games in Jerusalem and will compete in the… Read more »