Republican Jews have poured millions into upping their share of the Jewish vote in recent elections, portraying the GOP as the pro-Israel party and telling largely affluent Jewish Americans to vote their economic self-interest. The needle has only moved a little, despite those efforts: 80 percent of Jews voted Clinton in 1992, 79 percent voted Gore in 2000 and 74 percent voted Obama in 2008.

Organizations like the Republican Jewish Coalition have kept pushing despite it all. Most Jews don’t vote primarily based on Israel, but as Democrats passed a controversial Iran deal and condemned Israel’s West Bank occupation, Republicans saw a window of opportunity.

Republicans doubled down on the Israel case at their national convention in Cleveland last month. Donald Trump, Mike Pence and a handful of other speakers included lines in support of Israel in their speeches and drew loud applause. President Barack Obama’s support of Iran’s nuclear program, anathema to the Israeli government, was a nightly punching bag.

Dozens of delegates told JTA that the main reason Jews should vote Trump is that he’s better on Israel than his opponent, Hillary Clinton. The Republican platform swung right on Israel, eliminating the long-held bipartisan consensus supporting the two-state solution, and rejecting the United States’ right to dictate terms on Israeli-Palestinian peace.

Even so, Republican Jewish uneasiness showed at the convention. Big-name Jewish donors declined to attend. Republican Jews, from journalists Bill Kristol and Jennifer Rubin to former Republican operatives like Noam Neusner and David Frum, oppose Trump. The Republican Jewish Coalition held no events that were open to the media, a departure from previous conventions.

Much of this ambivalence has to do with Trump’s string of statements insulting minorities — Jews among them. It’s a point Democrats stressed every day of their confab a week later in Philadelphia. A video aired on the first night of the their convention featuring Trump’s retweet of an image widely called anti-Semitic. The convention’s explicit message was that anyone who cares about safeguarding minority rights has to vote Clinton.

The first night of the Democratic National Convention featured a string of Jewish public figures — Sarah Silverman and Sen. Al Franken among them — and it ended with a keynote speech by Bernie Sanders, the first Jewish candidate to win a major party primary. Jewish entertainers, activists and politicians peppered every night’s roster, from singer Paul Simon to Senator Barbara Boxer.

Criticism of Israel was a recurring feature in Philadelphia, a point the RJC pressed in an ad released last week calling the party “stridently anti-Israel.” Many Sanders supporters wore pro-Palestinian stickers, and a few advocated changing the United States’ historically pro-Israel policy. On Wednesday, a night devoted largely to national security, no one mentioned the U.S. alliance with Israel. There was full-throated support for the Iran deal throughout the convention. At one point, protesters outside the convention burned an Israeli flag. At a roundtable discussion held outside the convention by the US Campaign to End the Israeli Occupation and the American Friends Service Committee, Georgia Rep. Hank Johnson compared Israel’s West Bank settlement movement to termites.

But in the end, the party could point to the ways it shored up its traditional pro-Israel wing. The Democratic platform committee rejected an effort to even mention settlements and occupation in its section on Israel. Like Trump, Clinton threw a shout-out to Israel’s security into her acceptance speech, and didn’t mention Palestinians. Gen. John Allen, the former commander of NATO forces in Afghanistan, gave a convention speech in support of Clinton  that echoed neoconservative rhetoric, which tends to be forcefully pro-Israel. Even Bill Clinton got into the act, sporting a Hebrew “Hillary” button during Obama’s Wednesday night speech.

It could be that, in future election cycles, discord over Israel will drive more Jews to the Republican party. Part of Sanders’ dissent from Democratic orthodoxy was in his call for more criticism of Israel. In her acceptance speech, Clinton adopted much of his domestic rhetoric but none of his Middle East policies. But if Sanders delegates become the new Democratic mainstream, the party could gravitate away from its pro-Israel stance.

At Jewish Democratic events, though, the old guard held sway. If anything, the Democratic Jews’ biggest problem came from one of their own, Debbie Wasserman Schultz, who was ousted as chair of the Democratic National Committee at the convention’s start. Schultz was the favorite daughter of Jewish Dems, a former National Jewish Democratic Council staffer who rose to be a congresswoman and party bigwig. Now, she’s facing a primary challenge and could exit political life.

Even as she was embattled, the NJDC stood with her, presenting her with an award on the convention’s final afternoon. Wasserman Schultz sounded defiant at the event, calling Trump a traitor and promising to win her primary. And despite her fall from grace, Jewish Democrats cheered her, as if to say that whatever the future held, they felt good about this year. 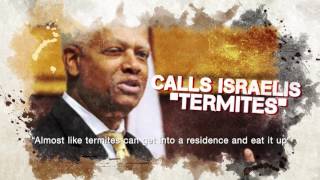 To name or not to name: Jewish organizations grapple with the Trump question › ‹ Does an American Jewish historian’s rejection of Zionism signal broader trend?